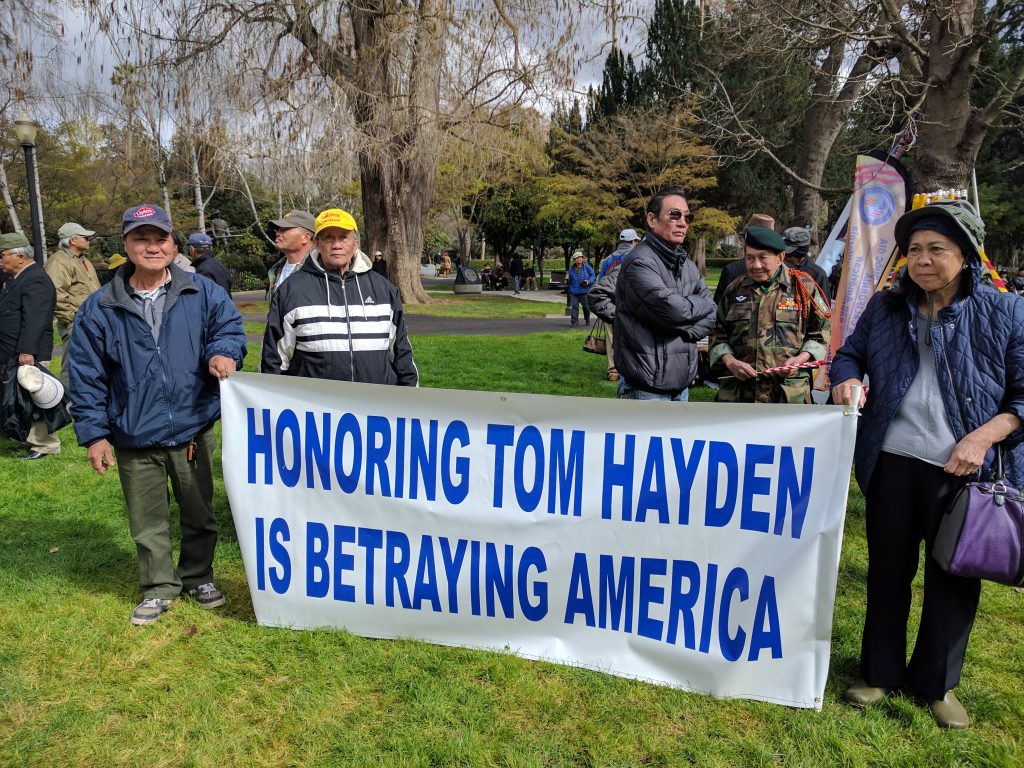 This week MAF Blogger Danny headed to the California State Capitol find out why dozens of Vietnam Veterans organizations and Vietnamese community groups gathered to protest the California Senate Leadership and demonstrate in support of Vietnam vets and their legacy.

The background: Last month the famous liberal activist and communist sympathizer Tom Hayden passed away. Hayden helped form the far left group SDS in Michigan and helped champion the progressive faction within the Democratic party that runs the DNC today. He was famously pro-communist, one of the most vitriolic critics protesting the Vietnam War, and was once married to another famous traitor Jane Fonda. Eventually Hayden was elected a State Assemblyman and later State Senator in California so after his passing the liberal-dominated California legislature held fawning speeches praising Hayden’s liberal legacy.

California State Senator Janet Nguyen came to the US as a refugee of the Vietnam War and sees Hayden as a traitor, like many in the Vietnamese community and also Vietnam war vets who had to come home from the war being spat upon by people like Hayden and “Hanoi” Jane Fonda.

When Nguyen rose to criticize Hayden’s legacy and actions regarding the Vietnam War, she was interrupted and forcibly removed from the floor by California’s Senate Leadership.

Many in the Vietnamese community took it as a personal insult that Nguyen was not allowed to speak, and that California’s Democrat Senators only wanted to praise Hayden and gloss over his treachery. So they gathered in the park of the State Capitol in protest, to support Nguyen, and stand for free speech.

Tan Ngo stood behind a yellow sign that read “Vietnamese-American Community of Sacramento.” He wore a brown jacket and black beret that in honor of the unit he fought for in the army of South Vietnam. He came to the US in 1975 at the age of 24 years old and he’s been a patriot ever since. “So many American heroes fought for freedom. We want that spirit to linger. So many vets came back, they were supposed to be honored.” he told me. When I asked him whether he came to denounce Tom Hayden or support Janet Nguyen, he said “I came to speak up fro America. We support the freedom of speech. They did the wrong thing.” he said, referencing the decision to cut Nguyen’s mic and remove her from the floor.

Jesse Orta is a VFW member and commander of the Veterans Affiliated Council of Sacramento. He fought in Vietnam in the US Army infantry and attended today’s event to stand up as a Nam vet, one of a few Hispanic people I saw at the rally. I asked Jesse how he feels about the anti-war people like Fonda and Hayden today compared to during the war. “I feel no different today than 1969.” he said “They have their right [ to speak out ]. We [ veterans ] our country called on us and we did nothing more than answer that call. We did our duty to protect Freedom of Speech even for the [expletive]-holes”. Orta said he was angry with California’s leadership for shutting down a viewpoint they did not agree with. “You should not deny to anyone their freedom of speech just because you don’t want any opposing views. We need to share this information. We [Americans] are losing our willingness to stand up for what we know is right.”

Richard Bui Jr. was one of the organizers of the event. He’s now 65 but he served in the US Army in the Vietnam War 1972-1975. Richard had family in Vietnam who he was fighting for, but lost them after the war. He told me that in his view the Democrats don’t appreciate the severity of Hayden’s treachery. “To my opinion, they don’t understand what Jane Fonda and her husband did. Jane Fonda was given a letter pleading for help from so many Vietnamese and she handed it over to the to the Vietcong. The Vietcong went after those people.”

As one of the organizers of the rally Capitol officials came out and spoke with Richard Bui and told him that his people could not fly their flags on Capital property. Citing some obscure regulation that I have never seen, Richard was told that the flags had to be made of wood only, and because they were on PVC the flags were illegal and couldn’t be flown. Richard shared this information with me and we both agreed that we’ve seen protests flying flags at the capitol many times before and it seems highly strange that the Capitol staff were enforcing this weird rule at this event but seemingly not at others. But to their credit, rather than get angry, the protesters respectfully rolled up their flags and continued on without them. When the left protests, they are never so compliant, there would have been a backlash which we’ve seen many times when visiting protest organized by Code Pink, ANSWER coalition, World Can’t Wait and other far-left groups.

Wayne Le was only 7 years old when he came the US. His father was friends with some American soldiers in the war and with their help got 5 of his immediate family and 24 other friends and family out of Vietnam before the fall. He said, “We demonstrate because Janet is the highest elected Vietnamese person to represent our community. Even though she was younger than me when she left Vietnam, I wanted to let her know that she’s not alone. What they did, cutting her off, saying she was out of order, I don’t understand that. I am a registered Democrat but I’m going to support her.”

Now here’s some more photos from the event!